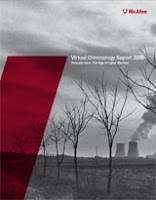 Is the “Age of Cyber War” at hand? This year, the fifth annual McAfee Virtual Criminology Report contemplates this question and others prompted by the fact that nation-states are arming themselves for the cyberspace battlefield. Since our 2007 report, when we last discussed the growing cyber threat to national security, there have been increasing reports of cyber attacks and network infiltrations that appear to be linked to nation-states and political goals. The most obvious of these attacks was the August 2008 cyber campaign against Georgia during the South Ossetia War. We decided it was time to further examine whether cyber warfare is now a part of human conflict that we should get used to seeing more often.

• Although there is no commonly accepted
definition for cyber war today, we have
seen nation-states involved in varying
levels of cyber conflict. Further, while we have
not yet seen a “hot” cyber war between major
powers, the efforts of nation-states to build
increasingly sophisticated cyber attack capabilities,
and in some cases demonstrate a willingness
to use them, suggests that a “Cyber Cold
War” may have already begun.

• If a major cyber conflict between nationstates
were to erupt, it is very likely that
the private sector would get caught in
the crossfire. Most experts agree that critical
infrastructure systems—such as the electrical
grid, banking and finance, and oil and gas sectors—
are vulnerable to cyber attack in many
countries. Some nation-states are actively doing
reconnaissance to identify specific vulnerabilities
in these networks. In the words of one expert,
nation-states are “laying the electronic battlefield
and preparing to use it.”

• Too much of the debate on policies related
to cyber war is happening behind closed
doors. Important questions, such as where to
draw the line between cyber espionage and
cyber war, are being discussed in private, or perhaps
not at all. Many governments have chosen
to keep debate on cyber conflict classified. Since
governments, corporations and private citizens
all have a stake in the future of the Internet, it is
time to open a global dialogue on how to manage
this new form of conflict.
There have been increased reports of
cyber attacks and network infiltrations
that appear to be linked to nation-states
and political goals.
* Miguel Correia - 17.11.09