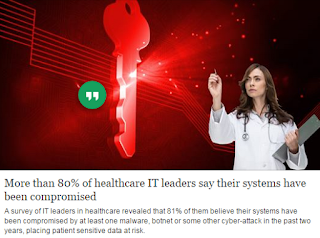 "Eighty-one percent of healthcare executives say their organizations have been compromised by at least one malware, botnet or other kind of cyberattack during the past two years, according to a survey by KPMG.

The KPMG report also states that only half of those executives feel that they are adequately prepared to prevent future attacks. The attacks place sensitive patient data at risk of exposure, KPMG said.